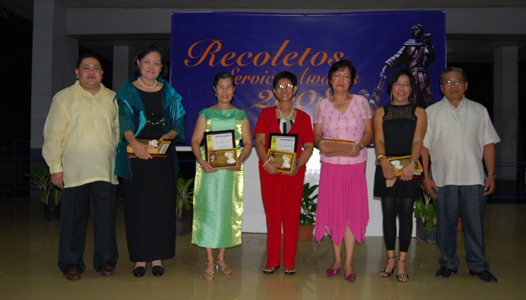 The University of Negros Occidental- Recoletos held its 2008 St. Ezekiel Moreno Service and Star of Tolentine Awards with 52 honorees at the UNO-R Main Lobby on September 9.

(L-R)Fr. Sixto M. Bitangjol, OAR, University President; Star of Tolentine Awardees: University Director of Libraries Arabella M. Ananoria; UNO-R Grade School Teacher Elnora Garcia;  Math Faculty Shiela Menchavez; CB&A Faculty Lourdes B. Pico and Febe Quingco; and Fr. Emeterio Buñao, OAR, Director of Scholarships during the ceremony.
Every year, employees of the University gather to witness the ceremonial giving of the St. Ezekiel Moreno Service and Star of Tolentine Awards to the teaching and non-teaching personnel of UNO-R who have rendered the 10, 15, 20, 25 and 30 years of service.

The awardees received a plaque and a certificate of recognition and cash gifts.

Having served the University for 39 years, Ananoria in her acceptance speech said, “From the very beginning, I realized that my stay in the university is a journey of faith in which God’s enduring presence in my life is deeply felt.” Ananoria is likewise the longest serving among the Star of Tolentine awardees.

University President Rev. Fr. Sixto Bitangjol, OAR, who thanked the awardees for taking part in making the history of UNO-R which created an impact on the lives of the people of Negros, gave out the awards together with Vice-President for Student Affairs Rev. Fr. Joel Alve, OAR.