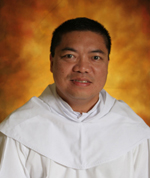 The University of Negros Occidental –Recoletos has named new officers for school year 2008 – 2009.

Rev. Fr. Antonio S. Limchaypo, OAR is the Principal of the High School Department.  He is also the current Vice President for External Affairs and the Alumni and Public Relations Officer.  Previously, Fr. Tony was assigned as Asst. Parish Priest of Our Lady of Consolation Parish is Quezon City in 1992 – 95. He was also assigned in the mission station in Kaoshiung, Taiwan in 1995-96.  He was the Spiritual Director at Colegio de Santo Tomas de Recoletos in San Carlos City in 1997 and was assigned din Cebu as Chaplain in 1997 – 2000. He served UNO-R as VP – Student Welfare from 2000 –2006 and was appointed as VP – External Affairs.

He holds a degree in Master of Arts in Theology, Masters in Broadcast Management, Master of Management in Educational Administration.

Rev. Fr. Walthrode B. Conde, OAR is the new director of the Human Resource Management Office.  Previously, Fr. Conde was assigned as the Athletic Moderator and as the Prefect of Discipline in San Sebastian College in Manila in the year 1971-1976.  He was also assigned as the Treasurer here in UNO-R at the year 1976-1982.  In 1982-1988, he was the VP- Admin & Academics of USJ-R in Cebu City.  He was also appointed as the Superior and President of the San Sebastian College in Cavite City in the year 1988-1991 and was the President up to 1994.  Then, he was assigned back to the USJ-R as the VP- Admin & Academics in 1994-2003.  In 2003, he was appointed as the President of the university.  He was the Coordinator of the Agriculture in UNO-R in 2003.

Rev. Fr. Excel B. Saycon, OAR is the new Religious Education Director.  Before his assignment to UNO-R, he was the Asst. Parish Priest in Tondo, Manila.

He holds a degree in masters of Arts in Theological studies.  Fr. Saycon is a Bachelor of Science in Industrial Engineering.

Rev. Fr. Joel A. Alve, OAR is the new Dean of the College of Arts & Sciences.  Previously, Fr. Alve was assigned as the Parochial Vicar of San Nicolas de Tolentino Parish in Talisay City the year 1999-2006.  In 2000-2006, he was the NSTP and the School Director of UNO-R Talisay. He was also the Executive Secretary of SEAP in 2001-2003.  In 2003-2006, he was appointed as the Principal of UNO-R Talisay and at the same time the Campus Minister.  As the Parochial Vicar of Talisay, he was the Local Vocation Promoter of the community in 2003-2006.  He was the VP-Student Welfare of UNO-R in 2006 up to the present.

Fr. Alve holds a degree in Master of Arts in Theological Studies and also a Doctor in Management, Major in Educational Management.