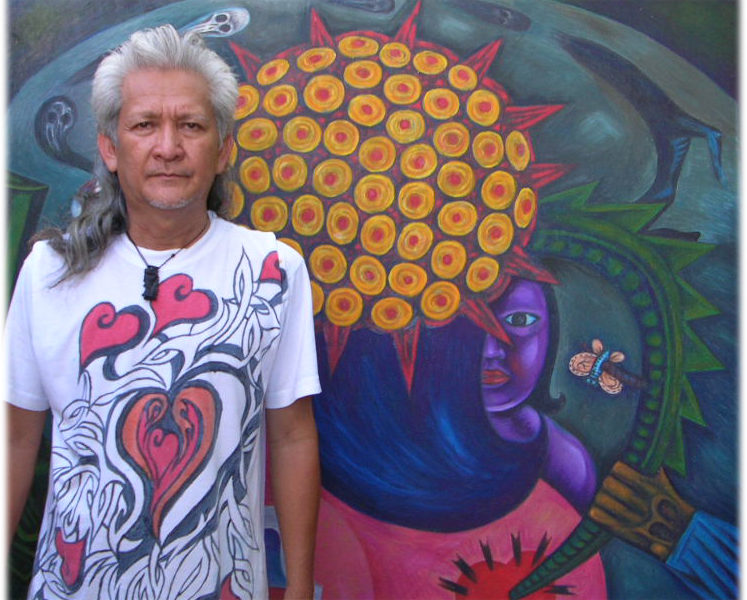 “Art is an expression of life, and this expression of life should find its fulfillment in educating the young mind.”  Internationally-acclaimed artist Nunelucio Alvarado believes that the true concept of art lies in the meaning it gives to the people and to the society.  Thus, he worked his way toward the empowerment and enhancement of the community through art, sharing his ideas and talents with the younger generation in the community where he exists.

At 56, Nunie enjoys a good and simple life with his family along the coastal areas of Barangay Old Sagay, Sagay City.  Inside his studio-type cottage lavished with inspiration from his surroundings, he continues to explore art from what he can create from simple indigenous materials to recyclable materials.

His college career started with advertising studies at La Consolacion College, Bacolod City, but his formal studies in painting found it ways at the College of Fine Arts, University of Philippines-Diliman where he earned a scholarship.  His exposure to student activism in 1968 inspired him to produce more paintings of social, political, economical, and other related themes, all embodying the ideals of “Social Realism” with alternative art as its medium.

Because of the strong influence he has effected on the younger generation, his own children managed to follow his footsteps in the field of art.  One of his sons, Nunelucio Jr., went into creative and alternative art, joined various arts competitions, and started to earn his own name in the field popularized by his father.  Now, he pursues various art exhibits in the province.

Extending his influence to the community, Nunie organized “Pintor Kulapol” in one small barangay situated in Old Sagay.   This group composed of individuals who did not have formal schooling but were able to feel the true work of art.  This group also realized that art is not exclusively for the professionals and for those who could afford high level education. Art is for everyone who possesses the ability and the faith in this ability.  Thus, “Pintor Kulapol” was able to produce excellent artists.  One of them is Sandy Coberos, who brought out the artist in him by utilizing his illusions.  Sandy was able to discover the beauty of art not through formal schooling but through interest and dedication.  These were his arms in garnering awards and prestige in his craft.

2007 is another year of prestige as Nunelucio Alvarado takes the centerstage with his a solo exhibit themed “Kasanag sang Taliambong” (Brightness of Art) on February 16-26, 2007 at the University of Negros Occidental-Recoletos (UNO-R) Main Lobby.  The exhibit opens formally on the 16th at 3 in the afternoon.  Art interaction with the students happens on the following.  This interaction will give the students the chance to now more about painting.  Lecture on basic painting will also be delivered by Nunie.  Artists’ Day is celebrated on the third day.  Famous artists in Negros Occidental will be featured for the students to interact with them and gain insights from said interaction.